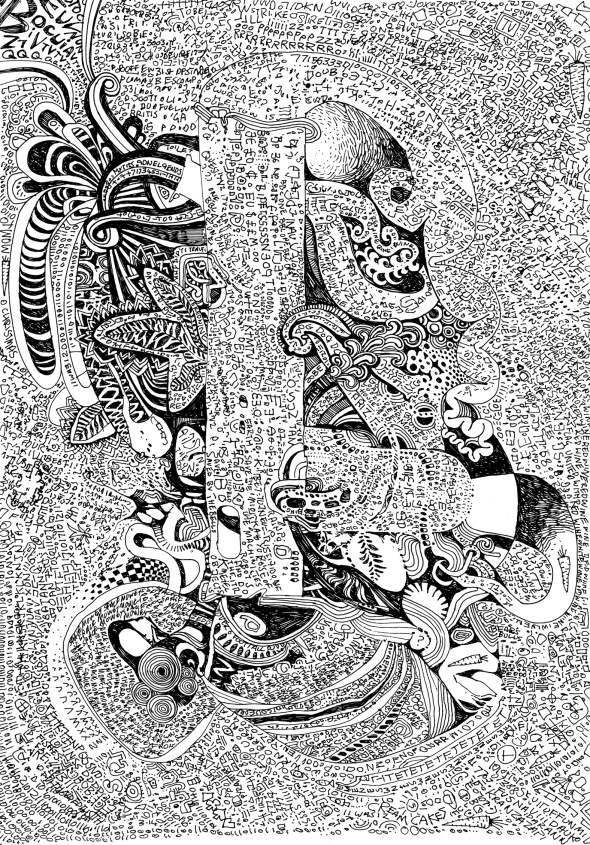 Recently I’ve blurted out a few obvious hints on Twitter that I’m dyslexic. I thought I’d write a few notes down as I’ve had a few people contact me wanting to know more and if my condition had anything to do with me being in comics. Please excuse, It’s a bit clunky.

It’s not a rare dysfunction it’s very common. Turns out 4% of the adult population is dyslexic, that’s massive.  I first knew I had a problem towards the end of primary school. I’d been stuck on the red reading books when everyone else had jumped up to yellow, green and blue. I had no idea why I couldn’t do what my friends could even though I knew I was just as smart. Then in the first year of Comprehensive I started copying friends work over their shoulder, ticking every box in multiple choice exams and generally making a mess of writing and spelling tests.

During the early 1980’s Exmouth Comprehensive had the biggest pupil population in Europe I found I could easily hide in the system and get through school without doing any real work at all. Pupils in the lower sets had behavior problems which deflected attention from me. I messed up all my final exams but had one moment of glory, a grade A O-level in technical drawing. I’m the only person in that school year to achieve this result which made me very proud.  After school I wanted to become an architect but unfortunately didn’t have the right qualifications so started on a building course and retook my academic CSE’s (before GCSE).

After being disenchanted with building I picked up the minimum qualifications for a BTEC foundation course in Art which in turn and with luck and help from friends moved to an HND in Illustration. I’ve had a lot of help from friends for which I’ll always be grateful, most of the time they’ll put it down to me being lazy. I’m happy to go along with this as it seems less embarrassing than telling them I’ve a learning difficulty.

I’ll tell you what I see when I look at a page of text but it could be different to what other people with dyslexia see. The brain is complex and there is a dyslexic spectrum. No two people have exactly the same problem. Like every neurological dysfunction names are given to crudely cover broad areas with many differences.

I can only read one letter at a time. The rest of the text is out of focus and in motion (swirling). Each letter of the alphabet has a different focal point. For instance an ‘n’ is in the background a ‘g’ is in the foreground and an ‘e’ is somewhere between the two. By concentrating tunnel vision onto an individual letter it magically comes into focus and stops moving. With many years practice reading can be done relatively quickly. As well as that translating text and understanding it are two separate jobs which need to be worked on simultaneously, once mastered its impressive stuff. Obviously this has an effect on reading confidence. Filling in forms is also difficult and I can easily spend a half hour writing a one sentence e-mail constantly checking between the lines to see if I haven’t accidentally insulted or confessed an embarrassing illness to a client.

Once, to prove a point I cut a small hole in a piece of paper, the hole being big enough to read just one letter. Scanning a line of text one letter at a time through the hole made very little difference to my reading speed.

The last book I read was twelve years ago. It promised to pin point the lost city of Atlantis with unquestionable proof. After putting in so much effort to reach it’s obviously silly conclusion I felt cheated. Thankfully I’ve switched to audio books and most of my reading now consists of newspaper articles and scripts.

Why is reading text so difficult when other objects on the page like pictures and icons are perfectly stationary and crystal clear? I’ve no idea but they are. This could be the reason why comics as a medium are so important to me, especially when I think back to when I was young and the affect they had on me.

With 4% of the population with dyslexia you would think that comics would be widely available in schools. To connect a picture with the text gives a certain amount of confidence that the story is going in the direction described and confidence is the key. Even if there are no pictures on a page there are still ways to build confidence using text. Breaking sentences into groups, making patterns with words, making words different sizes and using different type faces, surrounding words with space, it all helps. Spike Milligan used these techniques in some of his poems and the same can be seen in comics where words are written in different ways to illustrate different sound effects.

Imagine a school physics book with each page a sequence of panels containing Icons, symbols, bullet points, speech balloons and diagrams. The paradox is that the puzzle of reading seems to be fixed by creating a second layer of puzzles. A dyslexic reader facing a pictorial puzzle would be put back in control and especially for children it would turn a frustrating activity into an enjoyable one and with enjoyment comes a repetitive learning which in time will build into the tools needed as an adult to translate and read more easily. It’s a different type of learning that requires the creation of a different set of neurological pathways, a long process that goes beyond school years but is achievable.

To sum up I’ve never missed what I’ve never had and those new pathways have come in handy in ways I now take for granted. It’s all about those all-important school years and the confidence given with the right education. Let’s get comics into schools.

24 Comments on “My Dyslexia”